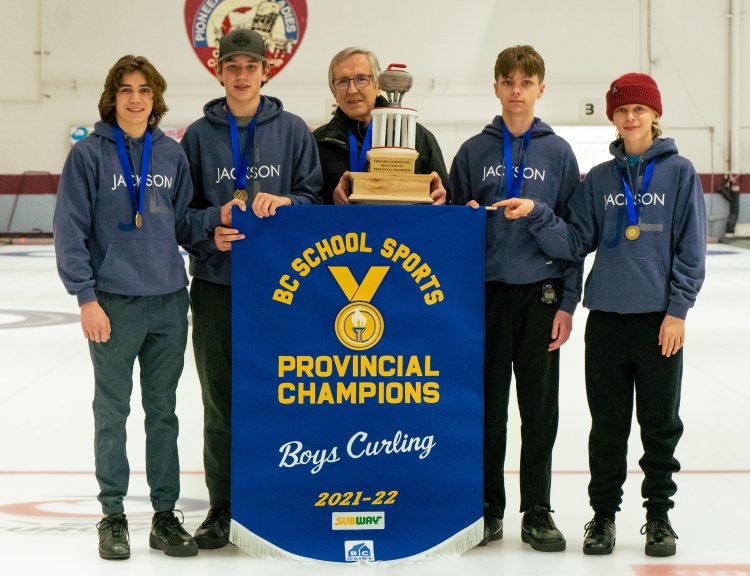 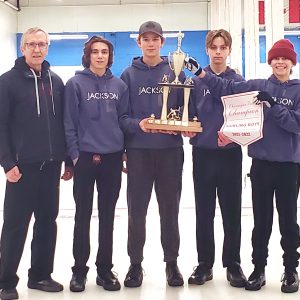 The J.L. Jackson team of:

are three Grade 9 boys and one Grade 10 boy who overcame big odds to win the BC Boys Provincial Curling Championship, March 2-4, 2022 in Kelowna.  They slipped through undefeated and the last game for the Championship promised high drama – two undefeated teams playing to determine the Champions . . . Riverside from Port Coquitlam skipped by Adam Fenton was also at 4-0.  Other schools representing their regions were Grand Forks, St Georges from Vancouver, Chilliwack and Nechako from Vanderhoof.

The lead changed hands several times and teams were tied after 5 ends at 4-4.  However, Salmon Arm broke it open in the 6, scoring 3 and stole another 3 in 7 whereupon Riverside shook hands.

The banner will hang proudly at J.L. Jackson and we’re hoping to secure a version to hang at our club.  It has indeed been a long while.

How they got there:

In Kamloops on Saturday, Feb 12th, the J.L. Jackson team emerged victorious to be crowned the Thompson Okanagan High School Champs.  They will go on to represent our Region at the High School Provincials to be held March 2-5 in Kelowna.

The Salmon Arm team of Grade 9 & 10 boys won both of their round robin games earning a bye to the final.  The boys scored a deuce in the opening frame but the older Kamloops Sa-Hali Secondary team responded with 5 points in the second end!  However, the JL Jackson boys stayed tough.  Down 3 in the sixth end, Salmon Arm countered with 3 points to tie the game.  In the seventh end, Salmon Arm looked to be in control sitting 3 behind multiple guards when the Sa-Hali skip made a game saving come around tap to put his team up one coming home.  In the eighth, our boys turned up the heat.  The Sa-Hali skip was left with virtually no shot on his last rock, and Salmon Arm notched 4 points without having to throw their last, securing the win.